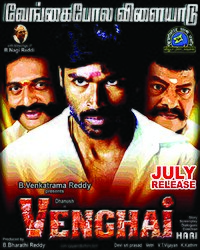 Venghai (English: Jaguar / Leopard) is a 2011 Indian Tamil action masala film written and directed by Hari, starring Dhanush and Tamannaah in the lead roles. The story is based in Sivagangai district. The filming started in November 2010 in Trichy, and the film was released on 8 July 2011 to generally negative reviews. It was dubbed Hindi as Meri Taqat Mera Faisla by Goldmines Telefilms.

Veerapandi (Rajkiran) is a rich and powerful man in Pandiapuram in the Sivagangai district. Selvam (Dhanush) is his son. Rajalingam (Prakash Raj) is the local MLA backed by Veerapandi. However, Rajalingam is in reality a corrupt politician, despite appearing good. One day, Veerapandi sends Selvam to Trichy to stay with his uncle Mariyappan (J. Livingston) ostensibly to tame rowdy behavior, but in truth to protect him. Selvam meets his childhood love interest Radhika (Tamannaah) who goes to college there. He proposes to her, but she tells him that she needs time to think about it. Selvam says he won't bother her for 6 months and will leave her alone if she refuses him after that time.