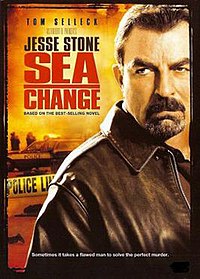 Jesse Stone: Sea Change is a 2007 American made-for-television crime drama film directed by Robert Harmon and starring Tom Selleck, Kathy Baker, and Kohl Sudduth. Based on the 2006 novel Sea Change by Robert B. Parker, the film is about the police chief of a small New England town who investigates the unsolved murder of a bank teller shot during a robbery, and an alleged rape that draws him into conflict with the town council. It hopes to preserve the town's reputation as an ideal seaside resort. Filmed on location in Nova Scotia, the story is set in the fictitious town of Paradise, Massachusetts. Jesse Stone: Sea Change is the fourth in a series of nine television films based on Parker's Jesse Stone novels.

In the small town of Paradise, Massachusetts, chief of police Jesse Stone (Tom Selleck) is on the phone with his ex-wife Jenn in Los Angeles, who tells him not to call her that night. She's started seeing someone, who finds it strange that the two still talk every evening. Stone is dealing with other changes: his deputy, Luther "Suitcase" Simpson (Kohl Sudduth), is still in a coma from a head-wound he received in a supermarket robbery; his other deputy, Molly Crane, resigned from the force to have a family. Her replacement, Rose Gammon (Kathy Baker), is learning to deal with Stone, as she had once worked for his predecessor.