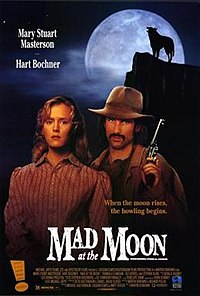 Mad at the Moon is a 1992 American Western horror film written and directed by Martin Donovan. It stars Mary Stuart Masterson, Hart Bochner, and Fionnula Flanagan. The film centers on a young woman who is married off to the half-brother of the man she loves. As strange deaths begin to occur, it becomes increasingly apparent that the man she married keeps a dark secret that may threaten the safety of everyone around her.

In 1892, Jenny Hill (Masterson) is infatuated with James Miller (Blake) the local outlaw. However, her mother (Flanagan) strongly disapproves and marries her off to Miller’s half-brother, Miller Brown (Bochner). Miller Brown loves Jenny but his love is not reciprocated. Eventually, Jenny discovers Brown’s hidden secret of being a werewolf.