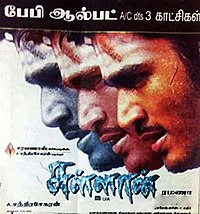 Sullan is a 2004 Indian Tamil-language masala film written and directed by Ramana. It stars Dhanush, along with Sindhu Tolani, Manivannan, Pasupathy and Easwari Rao among others. The film was composed by Vidyasagar. The film was opened to negative reviews from the film critics and audience. It was later dubbed in Telugu as Mourya.

Subramani (Dhanush), known as Sullan among his friends, is the son of a corporation garbage lorry driver named Mani (Manivannan). A first-year college student, his only objective in life is to have fun with his friends. He has a few unexceptional run-ins with Soori (Pasupathy), a moneylender who charges atrocious rates and then goes after those who fail to pay him back, but when Soori's actions touch his own family and friends, Sullan is forced to strike back.