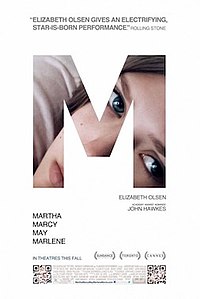 Martha Marcy May Marlene is a 2011 American dramatic thriller film written and directed by Sean Durkin, and starring Elizabeth Olsen, John Hawkes, Sarah Paulson, and Hugh Dancy. The plot focuses on a young woman suffering from delusions and paranoia after returning to her family from an abusive cult in the Catskill Mountains. The film contains several references to the music of Jackson C. Frank.

A 22-year-old woman named Martha has been living as a member of a cult in the Catskill Mountains for some time. The charismatic cult leader, Patrick, granted her the name Marcy May upon her initiation. However, she decides to flee, and escapes into the woods, arriving at a nearby town. In a diner, she is confronted by Watts, a cult member, who attempts to persuade her to return, but she refuses. Martha calls her sister Lucy, who picks her up and takes her to the vacation lake house in Connecticut that she shares with her husband, a successful and wealthy architect named Ted.