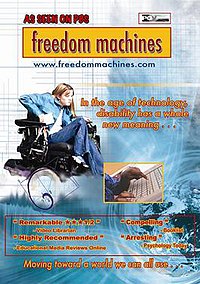 Freedom Machines is a 2004 PBS/P.O.V. documentary that looks at disability in the age of technology, presenting intimate stories of people ages 8–93, whose talents and independence are being unleashed by access to modern, enabling technologies. Nearly twenty years after the Americans with Disabilities Act of 1990, the film reflects on the gaps between its promise and the realities for our largest minority group – 54,000,000 Americans with disabilities. Whether mainstream tools or inventions such as a stair climbing wheelchair (iBOT), Freedom Machines examines the power of technology to change lives.