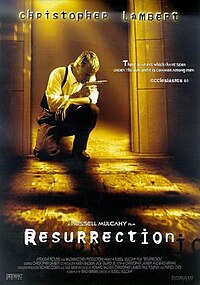 Resurrection is a 1999 American-Canadian horror thriller film directed by Russell Mulcahy and starring Christopher Lambert, Leland Orser and Robert Joy. David Cronenberg appears in a cameo as a priest. Lambert co-wrote the story for the film with Brad Mirman, who also wrote the screenplay.

Detective John Prudhomme, a Cajun transferred to Chicago, and his partner Hollinsworth are assigned to investigate the savage murder of a man whose left arm has been sawed off and taken. A message, "He Is Coming", is found written in lamb's blood on the victim's window. After another victim is discovered with a missing right arm, the detectives realize they are dealing with a serial killer.