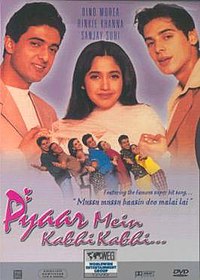 Pyaar Mein Kabhi Kabhi (English: Sometimes in love) is a 1999 Bollywood musical romance film directed by Raj Kaushal. The film starred debutantes Rinke Khanna, Dino Morea and Sanjay Suri. The film is set against the backdrop of a Performing Arts College. The film was the brainchild of Shailendra Singh and the first release from his production house, Percept Picture Company. Pyaar Mein Kabhi Kabhi was groundbreaking for the Bollywood film industry, presenting 300 debutantes in cast and crew, an industry first in Indian cinema. Most of the debutantes have gone on to illustrious careers, including Vishal Shekhar, Salim Sulaiman, Shaan, Mahalaxmi Iyer, Longines Fernandes, Neeta Kapoor, many of the actors and more. Upon release the film received mixed to positive reviews. The soundtrack remained an all time chart buster.

The film revolves around a group of talented friends, whose lives undergo a complete change with the arrival of a new student - Khushi (Rinke Khanna). The friends are Siddhant (Dino Morea), Bhargav or Bugs (Sanjay Suri), Ronnie (Akash Sehgal), Radha (Shweta Salve), Ruby (Melody), Manoj Dhanwani as ‘Haklu’ because he stammers a lot. They all are the young and vibrant students of National Institute of Performing Arts. With Khushi comes a lot of happiness in their lives and as the days pass by, both Sid and Bugs fall in love with her. But Khushi loves Sid. Sid is driven by a burning ambition of becoming a singer. He throws friendship aside for a desirable woman (Roxy), who he believes, is his stepping stone to success.