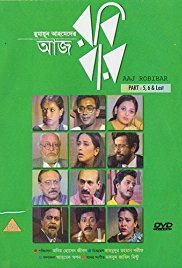 Aaj Robibar (; Today's Sunday) is a Bangladeshi television sitcom, created by Humayun Ahmed, that was originally aired on BTV in 1996. It was re-aired in Hindi on Indian television channel Star Plus in 2017.

The plot revolves around the day-to-day life of an eccentric household consisting of a man only called Dadajan ("grandpa"), his socially in-adept sons, two granddaughters, a boarder, the manservant and the maid.