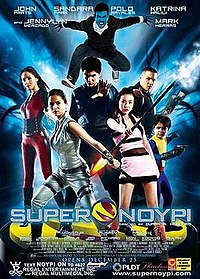 Super Noypi is a 2006 Filipino action superhero fantasy film released on December 25, 2006 and was directed by Quark Henares and produced by Regal Films. It was an official entry to the 32nd Metro Manila Film Festival.

Six normal childhood friends bound together by friendship find themselves faced with a shocking revelation – their parents are the legendary Super Noypi, the most powerful superheroes in the land! But now they are in danger, taken hostage by the wicked super-villain Diego (Monsour del Rosario). One by one, the six friends discover their super powers: the ability to move objects with their mind, becoming invisible at will, having superhuman strength and speed, transforming into any shape imaginable, casting spells and controlling fire and ice.