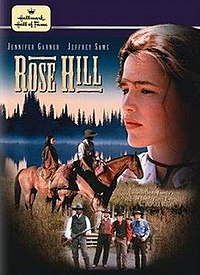 Rose Hill is a 1997 American Western film, directed by Christopher Cain and written by Earl W. Wallace. The film stars Jennifer Garner, Jeffrey D. Sams, Vera Farmiga, Justin Chambers, and Zak Orth. It is based on Julie Garwood's 1995 novel For the Roses. The film premiered on CBS on April 20, 1997.

Four Boston street urchins adopt a young infant that they discovered in a wagon when they made their escape from the police. They named the baby girl Mary Rose. As they grow up together, the five eventually settle in Blue Belle, Montana. In Blue Belle, Mary Rose and her four brothers (Adam, Cole, Douglas, and Travis) have a free-range cattle farm by the name of Rose Hill near a lake. There, Mary Rose grows up and longs to find her real family, as well as learn about her true identity.