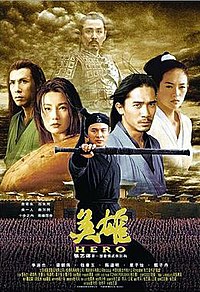 Hero is a 2002 Chinese wuxia film directed by Zhang Yimou. Starring Jet Li as the nameless protagonist, the film is based on the story of Jing Ke's assassination attempt on the King of Qin in 227 BC.

In ancient China during the Warring States period, Nameless, a Qin prefect, arrives at the Qin capital city to meet the king of Qin, who has survived multiple attempts on his life by the assassins Long Sky, Flying Snow, and Broken Sword. As a result, the king has implemented extreme security measures: no visitors are allowed to approach the king within 100 paces. Nameless claims that he has slain the three assassins, and their weapons are displayed before the king, who allows the former to approach within ten paces and tell him his story.