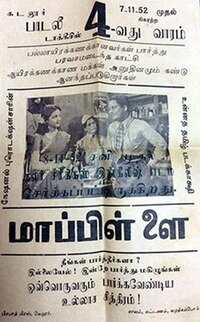 Maappillai is a 1952 Indian Tamil-language drama film directed by T. R. Raghunath and written by V. N. Sambandam. The film stars T. R. Ramachandran, P. K. Saraswathi and T. K. Ramachandran. It revolves around an office boy who becomes wealthy in a rags to riches manner, and the attempts made by his boss's son to destroy him and usurp his wealth. The film was released on 7 November 1952 and became a success.