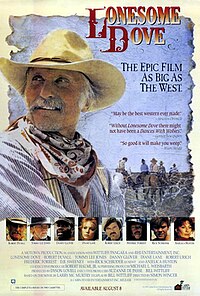 Lonesome Dove is an American epic Western adventure television miniseries directed by Simon Wincer. It is a four-part adaptation of the 1985 novel of the same name by Larry McMurtry and is the first installment in the Lonesome Dove series. The novel was based upon a screenplay by Peter Bogdanovich and McMurtry, intended to star John Wayne, James Stewart and Henry Fonda, but the film was never made after John Ford advised Wayne against it. The eventual television miniseries stars Robert Duvall and Tommy Lee Jones. The series was originally broadcast by CBS from February 5 to 8, 1989, drawing a huge viewing audience, earning numerous awards, and reviving both the television western and the miniseries.

In the late 1870s, Captain Augustus "Gus" McCrae and Captain Woodrow F. Call, two famous former Texas Rangers, run a livery in the small, dusty Texas border town of Lonesome Dove along the Rio Grande. Gus is an upbeat womanizer, but he's twice a widower, and Call is a strict, stoic workaholic. Working with them are Joshua Deets, a black tracker and scout from their Ranger days, Pea Eye Parker, another former Ranger who works hard but isn't very bright, and Bolívar, a retired Mexican bandit who is their cook. Also living with them is Newt Dobbs, a 17-year-old whose mother was a prostitute named Maggie and whose father may be any man on the ranch, save for Gus who secretly knows who Newt's true father is.