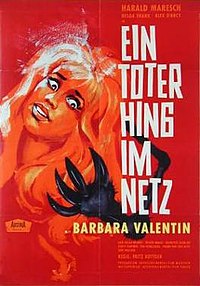 Horrors of Spider Island (, "A Corpse Hung in the Web") is a 1960 West German horror film directed by Fritz Böttger from his screenplay, and produced by Gaston Hakim and Wolf C. Hartwig for Rapid-Film/Intercontinental Filmgesellschaft. The film stars Alexander D'Arcy as Gary Webster, a talent agent who invites several girls to a club in Singapore. Their plane ride ends abruptly when they crash-land into the ocean. Webster and the women make their way to an island where they find a larger spider web. A giant spider sinks its teeth into Webster which turns him into a mutant.

Gary Webster (Alexander D'Arcy), a nightclub manager, flies a group of women from New York City to dance in his club in Singapore. While flying over the Pacific Ocean, their plane catches fire, splits in half, and plummets into the ocean; oddly enough, no one in Gary's group is killed. We next see the group a few days later, suffering from dehydration on a life raft, before they finally spot a small island and stagger to dry land.