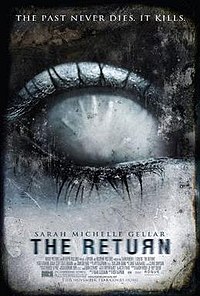 The Return is a 2006 American psychological horror film directed by Asif Kapadia and starring Sarah Michelle Gellar, Kate Beahan, Peter O'Brien, and Sam Shepard. It was released theatrically on November 10, 2006, and on DVD on February 27, 2007. The Blu-ray was released on October 6, 2009.

Joanna Mills (Sarah Michelle Gellar), a travelling rep for a trucking company, is dedicated to her successful career but something of a loner. Since the age of 11 she has been a troubled person, with episodes of self-mutilation and menacing visions. Normally she avoids returning to her native Texas, but agrees to a trip there to secure an important client. During the trip her visions, which take the form of memories of events not from her life, increase in intensity. She sees a strange face staring back at her in the mirror. Her truck radio plays Patsy Cline's "Sweet Dreams" no matter what station she selects. She stops at the scene of an accident that, on the following day, seems not to have happened. Joanna cuts herself in a bar restroom and is narrowly rescued by a friend. She visits her father, who observes that from age 11 she was "a different girl". The visions continue, becoming both more specific and more threatening, centering upon a menacing man she does not recognize and a bar she has never seen, but a picture of which is in one of her catalogs.