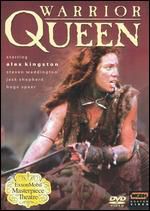 Boudica (released in the United States as Warrior Queen) is a British television film released in 2003. Starring Alex Kingston, Steven Waddington and Emily Blunt, in her film debut, the film is a biopic of the queen of the Iceni tribe, Boudica.

Boudica, the Warrior Queen of Britain, leads her tribe into rebellion against the Roman Empire and the mad Emperor of Rome Nero.