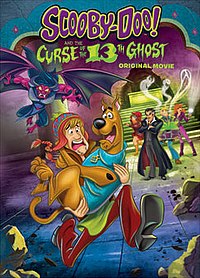 Scooby-Doo! and the Curse of the 13th Ghost is a 2019 American animated direct-to-video comedy mystery film produced by Warner Bros. Animation and distributed by Warner Bros. Home Entertainment, and the thirty-second entry in the direct-to-video series of Scooby-Doo films. The film is a continuation of the 1985 animated series The 13 Ghosts of Scooby-Doo, designed to provide resolution for the show's unfinished storyline. The film was released on DVD and digital on February 5, 2019.

A prologue set before The 13 Ghosts of Scooby-Doo depicts a young Vincent Van Ghoul and his partner Mortifer hunting down and successfully sealing the final ghost into the Chest of Demons. Mortifer, however, is attacked and seemingly killed by minion ghosts as a tearful Vincent makes his escape. In the opening credits, Vincent recaps the events of The 13 Ghosts of Scooby-Doo in which the titular dog eventually set the ghosts free once more but would catch all but one with the help of his friends Daphne and Shaggy.