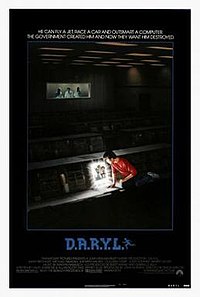 D.A.R.Y.L. is a 1985 science fiction film written by David Ambrose, Allan Scott and Jeffrey Ellis. It was directed by Simon Wincer and stars Barret Oliver, Mary Beth Hurt, Michael McKean, Danny Corkill, and Josef Sommer. D.A.R.Y.L was released in the United States on June 14, 1985 and released in the Singapore on May 5, 1986. The original music score was composed by Marvin Hamlisch.

"Daryl" (whose name is an acronym for "Data-Analyzing Robot Youth Lifeform") (Barret Oliver) is an experiment in artificial intelligence, created by a government company called TASCOM. Although physically indistinguishable from an ordinary ten-year-old boy, his brain is actually a super-sophisticated microcomputer with several unique capabilities. These include exceptional reflexes, superhuman multitasking ability, and the ability to "hack" other computer systems. The D.A.R.Y.L. experiment was funded by the military, with the intention of producing a "super-soldier".