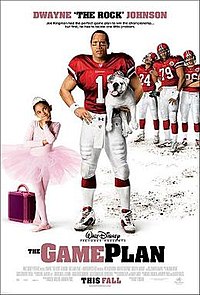 The Game Plan is a 2007 American family comedy film directed by Andy Fickman and written by Nichole Millard, Kathryn Price and Audrey Wells and starring Dwayne "The Rock" Johnson. It follows a professional quarterback who finds out he has an 8-year-old daughter from a previous relationship.

In the last game of the American Football Federation regular season between the Boston Rebels and the New York Dukes, Rebels quarterback Joe Kingman (Dwayne Johnson) scores a touchdown after ignoring an open wide receiver, Travis Sanders. The next morning, an 8-year-old girl named Peyton Kelly (Madison Pettis) arrives on Joe's doorstep saying that she is his biological daughter, and that his divorced wife, Sara, sent her there to meet him. His agent, Stella Peck (Kyra Sedgwick), thinks this will be bad for his image and distracts him with the upcoming playoffs.