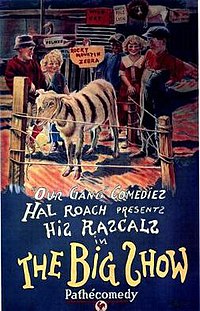 The Big Show is the ninth Our Gang short subject comedy released. The Our Gang series (later known as "The Little Rascals") was created by Hal Roach in 1922, and continued production until 1944.

After being chased away from the county fair, the gang decides to open their own junior version of the fair, complete with wild animal displays, rides, and animal stunts. To top it off, they give a live performance set inside a giant movie frame, and impersonate several popular film stars of the day.