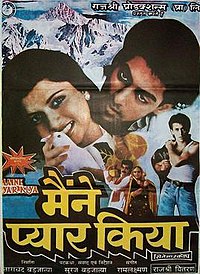 Karan (Alok Nath) is a poor mechanic who lives in the countryside with his one and only daughter, the beautiful Suman (Bhagyashree). He decides to venture out and try his luck in business and travel to Dubai so that he can accumulate enough wealth to get his daughter married. Thus, he decides to leave his daughter with his family friend Kishan (Rajeev Verma). Kishan, a wealthy businessman, lets Suman stay at his house while her father is away as he cannot turn down his old friend's request. Suman is befriended by Kishan's son Prem (Salman Khan), who assures her that a boy and a girl can be platonic friends.