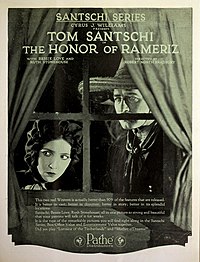 The Honor of Rameriz (often incorrectly referred to with the correct spelling of 'Ramirez': The Honor of Ramirez) is a 1921 American silent short Western film produced by Cyrus J. Williams and distributed by Pathé Exchange. It was directed by Robert North Bradbury and stars Tom Santschi, Bessie Love, and Ruth Stonehouse.

Near the Mexico–United States border, when a woman's (Love) gold is stolen by a thief (Hearn), the woman seeks help from Rameriz (Santschi). Rameriz's jealous wife (Stonehouse) and the woman's geologist husband (Morley) assume that the woman and Rameriz are having an affair. In the end, the gold is returned and the honor of Rameriz is restored.