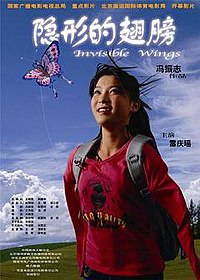 Invisible Wings is a 2007 Chinese film directed by Feng Zhenzhi and starring the amputee Lei Qingyao.

A teenage girl, Zhi Hua (Lei Qingyao), loses both her arms to an electric shock while recovering a kite from the electric wires. Distraught, she attempts to end her life but eventually finds a new will to live. She goes on to train her feet to do everything, such as writing, cooking, changing clothes and even making kites. She aspires to become a doctor but is denied admission and this makes her even more determined. She begins to train to become a swimming champion, beating all Olympic-level participants. She eventually goes on to become a national champion in swimming.