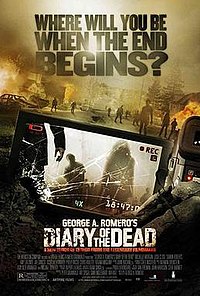 Diary of the Dead is a 2007 American found footage horror film written and directed by George A. Romero. Although independently produced, it was distributed theatrically by Dimension Films and was released in cinemas on February 15, 2008 and on DVD by The Weinstein Company and Genius Entertainment on May 20, 2008.

Film footage from a news crew shows a story about an immigrant man killing his wife and son before committing suicide. The son and wife turn into zombies and kill several medical personnel and police officers, but leave one medic and a reporter bitten before being killed. The narrator, Debra, explains that most of the footage, which was recorded by the cameraman, was never broadcast.