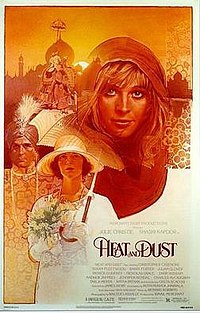 Heat and Dust is a 1983 British historical romantic drama film, with a screenplay by Ruth Prawer Jhabvala based upon her novel, Heat and Dust (1975). It was directed by James Ivory and produced by Ismail Merchant. It stars Greta Scacchi, Shashi Kapoor and Julie Christie.

In 1982, an Englishwoman named Anne (Julie Christie) begins an investigation into the fate of her great-aunt Olivia (Greta Scacchi), whose letters and diary she has inherited. She interviews the elderly Harry Hamilton-Paul (Nickolas Grace), who in his youth was Olivia's close friend when they were both living in India.