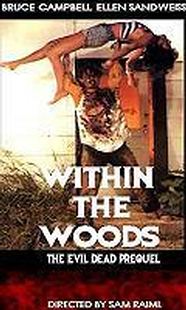 Within the Woods is a 1978 horror short film written, directed and produced by Sam Raimi. Raimi drew inspiration from his earlier short film Clockwork, deciding to produce a proof of concept horror film to help build the interest of potential investors. Raimi cast his friends Bruce Campbell and Ellen Sandweiss as the two protagonists and produced the film for $1,600. Shot on location in a remote cabin in the woods, production was a difficult process because of the low budget. Several of the special effects presented in the film were done in a severely low budget manner, some of which were improvised on set. The film centers around demonic possession and mysterious forces originating from the woods.

Two romantic couples, consisting of four teenagers, decide to spend a weekend together located in a remote cabin found in the woods. An unseen force stalks and watches the group without their knowledge. Ellen and her boyfriend Bruce enter the woods to have a picnic lunch. The other couple, Scotty and Shelly, remain at the cabin playing Monopoly to pass time. During their lunch, Bruce announces to Ellen that they're camping on an Indian burial ground. Ellen is concerned, but Bruce assures her that they will be fine as long as they don't disturb the graves of the dead. Bruce then explores the area and discovers an ancient dagger belonging to the Indians. Ignoring his own advice, he takes the dagger with him.