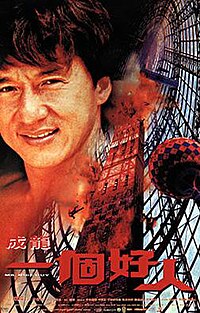 Television journalist Diana records footage of a cocaine deal gone wrong between the Italian mob and a street gang called The Demons. During the deal, mob boss Giancarlo kills the Demons' leader Grank and a gun fight ensues. Giancarlo spots Diana and her partner Richard and orders his gang to chase them. Richard is captured while Diana flees from the mobsters, bumping into TV chef Jackie, who helps her escape. During the chase, she accidentally switches the videotape of the drug trade with one of Jackie's cooking videos. Jackie brings the tape to his adoptive brother Romeo, a police officer. Romeo's children watch the video, unaware of what it is and that their father is investigating the mob. The mob force Richard to give them Diana's address. They ambush Diana at her house and kidnap her when they realize the tapes were switched and Jackie has the tape they want. Diana escapes after creating a distraction in front of a crowd.