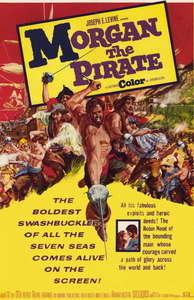 Morgan, the Pirate is a 1960 Italian-French co-production historical adventure film, directed by André de Toth and Primo Zeglio, and starring Steve Reeves as Sir Henry Morgan, the pirate who became the self-proclaimed governor of Jamaica.

In 1670, freeborn Englishman, Henry Morgan, is enslaved by the Spaniards in Panama and sold to Doña Inez, daughter of Governor Don José Guzmán. Morgan falls in love with his mistress, much to the dismay of her father, who punishes him by sentencing him to a life of hard labor aboard a Spanish galleon. Morgan leads his fellow slaves in mutiny, takes command of the ship, and becomes a pirate, without knowing that Doña Inez was on board, on her way to Spain. She becomes his prisoner, but spurns him when he declares his love in Tortuga. Not long after, Morgan's daring exploits on the Spanish Main pique the interest of King Charles II of England, and Morgan agrees to attack only Spanish vessels in return for English ships and men. Fearing for the security of Doña Inez, after the pirates discover her identity, he permits her to return to Panama. Once there, she warns Don José of Morgan's planned invasion, and the pirate ships are either easily sunk or routed by the alerted Spanish. Not giving up, Morgan leads his men overland and attacks the city from the rear. The maneuver succeeds, Panama falls to the pirates, and Doña Inez finally admits her love for Morgan.