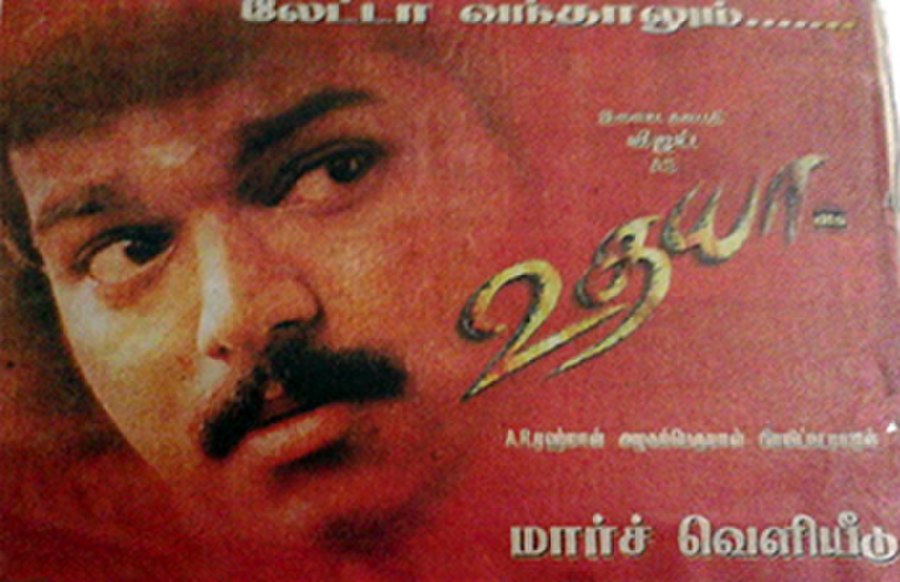 Udhaya is a 2004 Indian Tamil-language action thriller film which was directed by Azhagam Perumal. The film features Vijay and Simran in lead roles, while Vivek, Nassar and Rajesh play other supporting roles. The soundtrack for the film was composed by A. R. Rahman and the background score was by Pravin Mani. The editing was by Raja Mohammad, and the cinematography was by Priyan.

Udhayakumaran (Vijay) is a college student who does research on subatomic physics. He is offered a research position at Princeton University due to his ground-breaking research papers. However, he declines the offer and becomes a lecturer in his college, where he meets Vasanthi (Simran), and they fall in love with each other. Udhaya later comes to know that she has already been engaged and decides to move to another city. With the help of Basheer (Vivek), he finds a job as a reporter in Chennai. Unfortunately, Basheer dies in a bomb blast, and Udhaya unwittingly gets to meet the people responsible for Basheer's death, who introduce him to their boss Dhananjay Veeran (Nassar), who poses as a crusader with veiled intentions. Udhaya sympathizes with the crusaders and helps build an instrument to break granite slabs, aiding manual labor. Later, he builds a bomb born out of his research and gives it to Veeran to help their cause in supporting laborers. However, Veeran uses the bomb on a train without Udhaya's knowledge, killing many innocent people and framing Udhaya for the bomb blast, who is further arrested for a crime he did not commit. En route from the court, the police vehicle is caught in a puddle, and Udhaya gets a chance to escape. On the run, he stumbles upon Veeran and his accomplice discussing a plot to bomb a school bus, and then, he comes to the realization that Veeran is the culprit. Udhaya manages to save the school kids from the explosion. Veeran arrives and attempts to shoot Udhaya. A fight ensues in which Veeran is thrown into the flames of the wreckage. Udhaya is arrested and tried in court, where he pleads not guilty and is released, embracing Vasanthi as the credits roll.