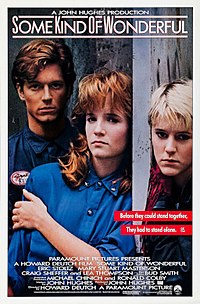 Some Kind of Wonderful 1987

Some Kind of Wonderful is a 1987 American romantic drama film directed by Howard Deutch and starring Eric Stoltz, Mary Stuart Masterson, and Lea Thompson. It is one of several successful teen dramas written by John Hughes in the 1980s.

The film is set against the strict social hierarchy of an American public high school in suburban Los Angeles. Blue-collar mechanic and aspiring artist Keith Nelson (Eric Stoltz) and his tomboyish friend Watts (Mary Stuart Masterson), who has been subjected to rumors that she is a lesbian, aspire to improve their social standing. Keith is an aspiring artist, but his blue-collar father is obsessed with sending him to college, as he would be the first in their family to go to college.