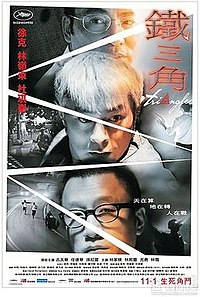 Triangle is a 2007 Hong Kong action film produced and directed by Tsui Hark, Ringo Lam, and Johnnie To. The film's title refers to both the acclaimed trio of filmmakers and to the uneasy brotherhood of the film's three protagonists. Triangle tells one story which is told in three thirty-minute segments, independently helmed by the three directors. It stars Louis Koo, Simon Yam and Sun Honglei as a group of friends who uncover a hidden treasure that quickly draws attention among others. The film's tagline is "Temptation. Jealousy. Destiny." Each word is often associated with the segments that appear in chronological order.

Small-timer Fei (Louis Koo), his married buddy Sam (Simon Yam), and antique store owner Mok (Sun Hong Lei) are all in desperate need of money. Fei wants his friend to drive a robbery getaway car but Sam backs out, throwing Fei in trouble with the triads. As the three are arguing, a mysterious man leaves them a map, leading them to an unlikely treasure under the Legislative Council building. All their financial woes seem to be solved after a late-night heist, but they are being tracked by shady cop Wen (Gordon Lam), who is carrying on an affair with Sam's emotionally unstable wife, Ling (Kelly Lin), and has connections with Fei. When the twisted relationship tangles come to light, the brotherhood dangerously breaks down and the treasure ends up in the wrong hands.