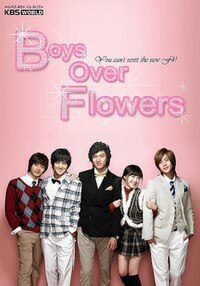 Boys Over Flowers is a 2009 South Korean television series that is based on the Japanese shōjo manga series written by Yoko Kamio. The series is about a working-class girl who gets tangled up in the lives of a group of wealthy young men in her high school. It earned high viewership ratings in South Korea and popularity throughout Asia. It starred Ku Hye-sun, Lee Min-ho, Kim Hyun-joong, Kim Bum, Kim Joon and Kim So-eun. The series played a major role in escalating the Korean wave and is widely considered as one of the best dramas of all time. It aired for 25 episodes on KBS2 from January 5 to March 31, 2009. Lee Min-ho played a totally contrast role as the leader of F4 compared to his role in Mackerel Run which ultimately launched him from stardom to superstardom. Several years later, It aired on Netflix and won international acclaim, due to Lee Min-ho's popularity worldwide.