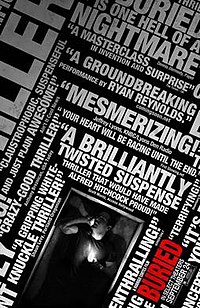 Buried is a 2010 English-language Spanish psychological thriller film directed by Rodrigo Cortés. It stars Ryan Reynolds and was written by Chris Sparling.

In 2006, Paul Conroy, an American civilian working in Iraq, wakes to find himself buried in a wooden coffin with only a Zippo lighter and a BlackBerry phone at hand. He starts to piece together what has happened to him. He remembers that he and several others were ambushed by terrorists. He was hit by a rock and passed out. He receives a call from his kidnapper, Jagbir, demanding that he pay a ransom of $5 million by 9 PM or he will be left in the coffin to die.