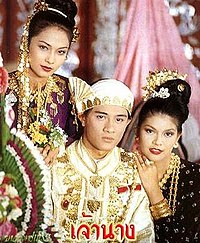 Jao Nang, also known as The Princess's Terror (; ), is a period horror Lakorn which originally aired in the mid-1990s and became known among Thai viewers as the most frightening lakorn. It starred Chakkrit Amarat (จักรกฤษณ์ อำมรัตน์) and Kavinna Suvannaprateep (กวินนา สุวรรณประทีป) in the leading roles.

A princess of the northeast kingdom, suddenly possessed by the spirit of an ogress, turns to an evil spirit to find the raw food and fresh blood that must be provided in a banana leaf for a sick spirit. This has occurred over the centuries, with several generations of princesses in terror.