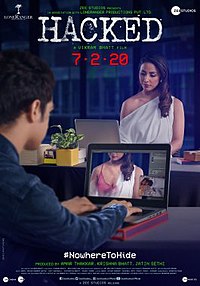 Hacked is a 2020 Indian Hindi-language psychological thriller film directed by Vikram Bhatt and produced by Krishna Bhatt, Amar Thakkar and Jatin Sethi under their banner Loneranger Productions. The film stars Hina Khan, Rohan Shah, Mohit Malhotra and Sid Makkar. The story revolves about a boy's love for an older girl and how it turns into an obsession.

Sameera "Sam" Khanna (Hina Khan) works at a magazine company; she has a neighbor Vivek (Rohan Shah) who has a crush on her. Sam has a very fragile relationship with her boyfriend, a film director Om Kapoor (Sid Makkar), as he reciprocates feelings whenever he likes.