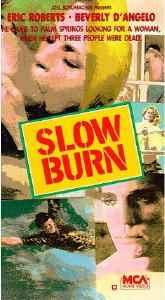 Jacob Asch (Roberts) is hired by Gerald McMurty (Barry) to find his ex-wife Laine and their son in Palm Springs. Jacob finds Laine and a teenager named Donnie who may or may not be Gerald's son. He also finds an intricate web of deceit and betrayal that begin to lead to death. He takes it upon himself to unravel the mystery and find out who is killing people and why.