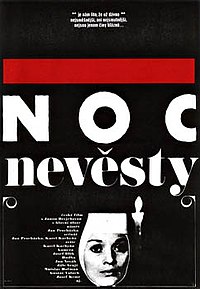 The Nun's Night is a 1967 Czechoslovak film directed by Karel Kachyňa adapted from a novel by Jan Procházka. Set in a Moravian village in the early 1950s, a time of collectivisation as well as mass closures of monasteries and convents by the Stalinist regime, the film is an evocative critique of religious fanaticism and political ideology.