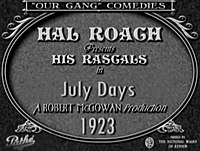 July Days is the 16th Our Gang short subject comedy released. The Our Gang series (later known as "The Little Rascals") was created by Hal Roach in 1922, and continued production until 1944.

A new family moves into town. Mickey immediately falls in love with the family's daughter, Mary, and tries whatever he can to gain her affections. He tries taking her for a ride on his goat-powered wagon, and later dresses up as a knight. In the interim, the village blacksmith, "Dad" Anderson, receives a lucrative contract to produce a creation of his: a sail-propelled scooter. The gang is lucky enough to get a hold of a few of these scooters, and happily sail down the city streets.