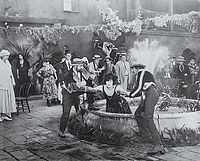 Mud and Sand is a silent film starring Stan Laurel. Laurel plays a matador who makes a fool of a famous Spanish dancer. The dancer demands revenge and, in the end, kills the matador by throwing a concealed brick at him after a fight with the fiercest bull in Spain. The moral of the story, shown in the last scene, is: "If you want to live long — and be happy — cut out the bull!" The title spoofs the Rudolph Valentino film Blood and Sand, and many scenes directly parody that film.