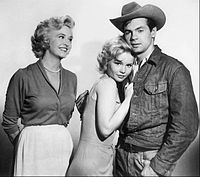 Bus Stop is a 26-episode American drama which aired on ABC from October 1, 1961, until March 25, 1962, starring Marilyn Maxwell as Grace Sherwood, the owner of a bus station and diner in the fictitious town of Sunrise in the Colorado Rockies. The program was adapted from William Inge's 1955 play, Bus Stop, and Inge was a script consultant for the series, which followed the lives of travelers passing through the bus station and the diner. Maxwell's co-stars were Richard Anderson as District Attorney Glenn Wagner, Rhodes Reason as Sheriff Will Mayberry, Joan Freeman as waitress Elma Gahrigner, Bernard Kates as Ralph the coroner, and Buddy Ebsen as Virge Blessing. Increasingly, as it became difficult to have guest stars be characters arriving by bus every week, the stories became more about people in the town which left little for Maxwell's character to do and led to her leaving the series after 13 episodes. She said, "There was nothing for me to do but pour a second cup of coffee and point the way to the men's room."