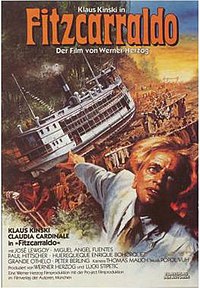 Fitzcarraldo is a 1982 West German epic adventure-drama film written and directed by Werner Herzog and starring Klaus Kinski as the title character. It portrays would-be rubber baron Brian Sweeney Fitzgerald, an Irishman known in Peru as Fitzcarraldo, who is determined to transport a steamship over a steep hill to access a rich rubber territory in the Amazon Basin. The film is derived from the historic events of Peruvian rubber baron Carlos Fitzcarrald and his real-life feat of transporting a disassembled steamboat over the Isthmus of Fitzcarrald.

Brian Sweeney "Fitzcarraldo" Fitzgerald is an Irishman living in Iquitos, a small city east of the Andes in the Amazon Basin in Peru in the early part of the 20th century, when the city grew exponentially during the rubber boom. He has an indomitable spirit, but is little more than a dreamer with one major failure already behind him – the bankrupted and incomplete Trans-Andean railways. A lover of opera and a great fan of the internationally known Italian tenor Enrico Caruso, he dreams of building an opera house in Iquitos. Numerous Europeans and North African Sephardic Jewish immigrants have settled in the city at this time, bringing their cultures with them. The opera house will require considerable amounts of money, which the booming rubber industry in Peru should yield in profits. The areas in the Amazon Basin known to contain rubber trees have been parceled up by the Peruvian government and are leased to private companies for exploitation.