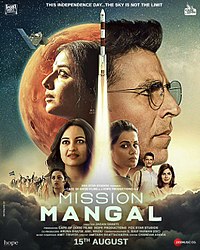 Across the landscapes of Bengaluru, at ISRO, after the failed launch of GSLV-F06 on 25 December 2010, due to a miscalculation by Project Director Tara Shinde (Vidya Balan), Rakesh Dhawan (Akshay Kumar), a fellow scientist working with her, takes the blame for the mistake. As a result, he is relocated to work on Mangalyaan as punishment, where Tara joins him out of guilt. The new GSLV missions are given to Rupert Desai, a NASA scientist of Indian origin. The MoM (Mars Orbiter Mission) is thought of as an impossible mission by his coworkers due its aim of reaching Mars with its tight budget.