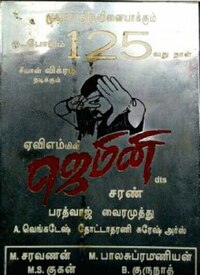 Gemini is a 2002 Indian Tamil-language action film written and directed by Saran and produced by AVM Productions. The film features Vikram in the title role of a small-time criminal and aspiring don who, after falling in love, decides to refrain from crime; Kiran Rathod plays his love interest. Murali stars as Singaperumal, a police officer who inspires and guides Gemini in his attempts to reform. The cast includes Kalabhavan Mani as the main antagonist while Vinu Chakravarthy, Manorama and Thennavan portray significant roles. Based on gang wars in Chennai, the film delves into the lives of outlaws and the roles the police and society play in their rehabilitation and acceptance.

Teja is a high-profile gangster in North Madras who often imitates the behaviour characteristics of different animals for sarcastic effect. Accompanied by his gang, he arrives at a magistrates' court for a hearing. His animal antics are mocked at by "Chintai" Jeeva, another accused. Teja and his gang retaliate and kill Jeeva within the court premises. Jeeva was a member of a rival gang headed by Gemini, an aspiring goon from Chintadripet who wants to dethrone Teja and take his place. To avenge Jeeva's death, Gemini hunts down the murderer Pandian while Isaac, one of Gemini's men, kills him. This incident leads to a feud between Gemini and Teja, and a fight for supremacy ensues. Pandian's mother Annamma, a destitute woman, locates the whereabouts of her son's murderers. She approaches Gemini, becomes the gang's cook, and awaits a chance to poison them.