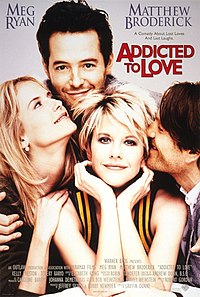 Addicted to Love is a 1997 American romantic comedy film directed by Griffin Dunne and starring Meg Ryan, Matthew Broderick, Tchéky Karyo, and Kelly Preston. Its title is based on Robert Palmer's song "Addicted to Love", a cover of which by Neneh Cherry is featured in the film.

The story begins in a small town where Sam (Matthew Broderick) and Linda (Kelly Preston) seem to have an idyllic life, where they were sweethearts since childhood. She wants to know more than their quiet life and goes for a time to NYC. Instead of returning as first planned, she forwards a 'Dear John' letter. He leaves almost immediately for the city, convinced he can get her back.