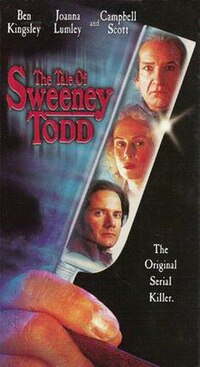 The Tale of Sweeney Todd is a 1998 American crime-drama/horror television film directed by John Schlesinger and starring Ben Kingsley and Joanna Lumley. The teleplay by Peter Buckman was adapted from a story by Peter Shaw. It was broadcast in the United States by Showtime on April 19, 1998 and released on videotape in France the following month. It later was released as a feature film in select foreign markets.

Set in 19th Century London, the story focuses on Sweeney Todd (Ben Kingsley), a murderous barber whose business provides him with two profitable sidelines, the sale of his victims' jewelry and the disposal of their bodies to his mistress Mrs. Lovett (Joanna Lumley), who uses them to prepare meat pies for her unsuspecting clientele.