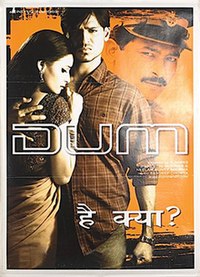 Dum is a 2003 Indian Hindi-language action film directed by Eeshwar Nivas and produced by Ali and Karim Morani. The film stars Vivek Oberoi, Diya Mirza, Govind Namdeo and Atul Kulkarni and is a remake of 2001 Tamil film Dhill. Sushant Singh, Mukesh Rishi and Sheeba have supporting roles. The film's music was penned by Sandeep Chowta, under the banner of Sony Music Studios.

Uday (Vivek Oberoi) and Mohan come from poor middle-class families. Against their families wishes, the boys are hell bent on joining the police force. The duo aim to make it big solely on the basis of their abilities. Despite lack of any recommendations or leverages to make it to the police academy, luck smiles on them in the form of Raj Dutt Sharma, their training officer.