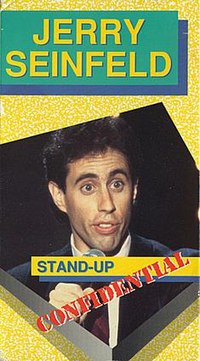 Stand-Up Confidential is a 1987 stand-up comedy special and the first starring Jerry Seinfeld with some skit inserts which were co-written by Joel Hodgson. The special aired on HBO on September 5, 1987 from Los Angeles, California. It was then released on VHS in 1993 when the television show Seinfeld was gaining popularity.