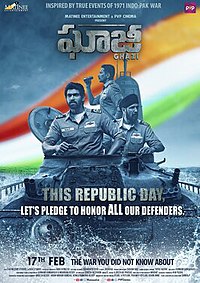 The Ghazi Attack (Ghazi in Telugu) is a 2017 Indian war film written, and directed by Sankalp Reddy. The film, based on the mysterious sinking of during Indo-Pakistani War of 1971, was shot simultaneously in Telugu and Hindi and dubbed into Tamil. The film stars Rana Daggubati, Taapsee Pannu, Kay Kay Menon and Atul Kulkarni. The film was released worldwide on 17 February 2017 to positive reviews.

The Indian Navy decodes a secret code sent from Pakistan to then-East Pakistan (modern-day Bangladesh) and intelligence report of a Pakistan Navy's submarine called PNS ''Ghazi'', a much more advanced submarine than S21 or any other Indian submarine, being sent through the Bay of Bengal under the command of Cdr. Razak Khan (Rahul Singh). The top command dispatches S21, a submarine, under the command of Capt. Ranvijay Singh (Kay Kay Menon) for surveillance. To temper Singh's belligerent tendencies, the Indian Navy Admiral assigns Lt. Commander Arjun Varma (Rana Daggubati), with orders to ensure that Singh does not confront any Pakistani warships and trigger a war.