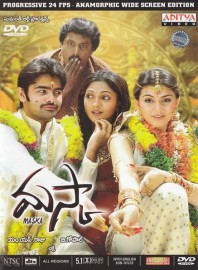 Maska is a 2009 Telugu romantic action comedy film. It was directed by B. Gopal and starred Ram, Hansika Motwani, Sheela, and Sunil. It was released on 14 January 2009 with 300 prints in 550 theaters. It was remade into Bengali (Bangladesh) as Onnorokom Bhalobasha in 2012 for Valentine's Day. It was also remade into Bengali (India-Bangladesh joint venture) as Hero 420 in 2016 for Valentine's Day. The film was dubbed into Hindi as Phool Aur Kante. It turned out to be a Average at the box office.

Krish (Ram) is a happy-go-lucky guy who lives with his brother (Naresh) and sister-in-law (Jhansi). He was in love with a girl named Manju (Sheela), who happens to be the daughter of Simhachalam (Mukesh Rishi). Krish's only intention is to become rich by marrying her, and he does not have any feelings whatsoever towards her. He weaves a love story between him and a girl called Meenakshi aka Meenu (Hansika Motwani) to make Manju fall for him. He also meets Meenu, starts to like her for real, and falls in love with her. Meanwhile, Simhachalam and Shinde (Pradeep Rawat) run against each other in a presidential election in Delhi. Shinde is a man of misdeeds and tries to find faults in Simhachalam's personal life so that he can expose him in front of the high command of the party so that his route will be clear to get the party ticket. Shinde comes to learn that Simhachalam has another wife (Seetha) and a daughter who lives in Hyderabad. He sends his men to find them. Unfortunately, Simhachalam fixes Manju and Krish's marriage, but Krish loves Meenu. Manju discovers it and points a gun on Meenu, but she leaves Krish to her and reveals that Meenu is the unofficial daughter of Simhachalam and the sister of Manju. Simhachalam, Krish, and Shinde arrive. Meenu and Manju emotionally ask their father to forget everything and live happily. He gives up the election to Shinde. Krish then marries Meenu and Manju lives happily.